Phased array can successfully overcome many of the inconsistencies of the manual application. A phased array probe is constructed from a number of very small elements arranged in a line or in a specific cluster design. By activating a number of the elements at once and applying specific voltages to each element a predetermined beam angle, or beam of varying angles can be produced. Furthermore, by moving the active elements along the probe the beam is moved forward/backward in a manner similar to the movement of a manual technique.

When the phased array wedge is placed on the parent material at a specific stand-off position and moved along the weld, data can be collected and imaged as a C-scan (plan view) of the weld, much like a traditional radiograph. To compliment this, the ultrasonic imaging system can also show the A-scan, a B-scan (end view), a D-scan (side view) and in the case of a beam with varying angles an S-scan (or sectorial scan). 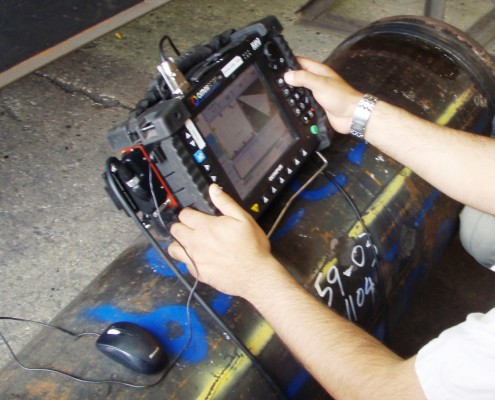 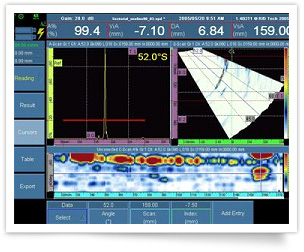 Ultrasonic phased arrays is an advanced techniques that  use a multiple element probe whereby the output pulse from each element is time delayed in such a way  so as produce constructive interference at a specific angle and a specific depth. These time delays can be incremented over a range of angles to sweep the beam over the desired angular range. For example, 40 to 75 degree beam sweep would be produced by calculating the time delays to produce constructive interference at 40, 41, 42 …75 degs. This NDT technology is also referred as Swept Beam Ultrasonic testing.

The main advantages of phased array in NDE are:

The PA probe consists of many small ultrasonic transducers, each of which can be pulsed independently. By varying the timing, for instance by pulsing the elements one by one in sequence along a row, a pattern of constructive interference is set up that results in a beam at a set angle. In other words, the beam can be steered electronically. The beam is swept like a search-light through the tissue or object being examined, and the data from multiple beams are put together to make a visual image showing a slice through the object

Applications of PAUT are in industrial products  materials such as welds in structure, nozzles and other geometries..

Single-element (non-phased array) probes, known technically asmonolithic probes, emit a beam in a fixed direction. To test or interrogate a large volume of material, a conventional probe needs scanning for the same. Instead of a single transducer and beam, phased arrays use multiple ultrasonic elements and electronic time delays to create beams by constructive and destructive interference. As such, phased arrays offer significant technical advantages for weld testing and plant monitoring over conventional ultrasonics as the phased array beams can be steered, scanned, swept and focused electronically from a fixed probe position. Beam steering permits the selected beam angles to be optimized ultrasonically by orienting or focussing them perpendicular to the predicted discontinuities, for example lack of fusion in automated weld inspections.

TOFD (Time of Flight Diffraction) technique is a computerized and automated system for weld inspection which is able to scan, store, and evaluate indications in terms of height, length, and position with a grade of accuracy never achieved by other ultrasonic techniques. TOFD has two blind zones where it is not sensitive to defects; hence TOFD needs to be supplemented by a conventional pulse-echo examination of the near and far walls. 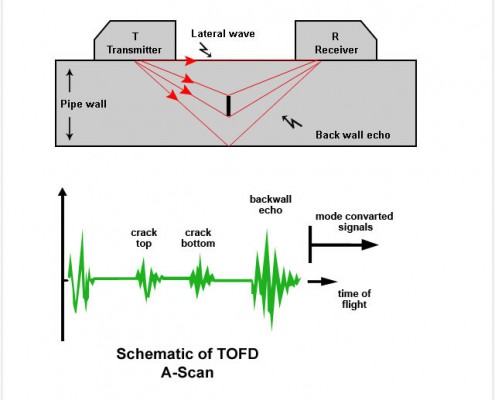 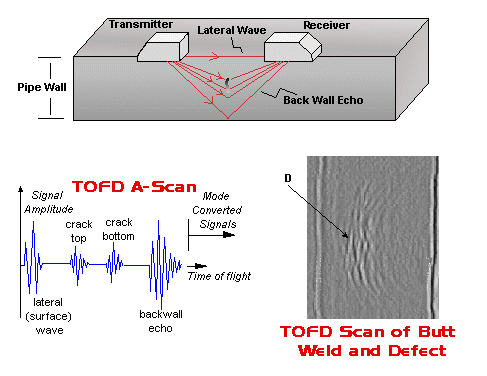 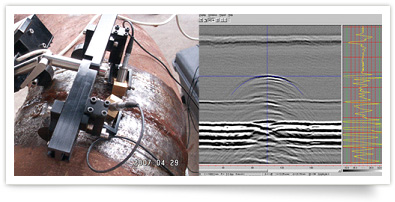 Time-of-flight diffraction (TOFD) is a sensitive and accurate method for the nondestructive testing of welds for defects. TOFD originated from tip diffraction techniques.

In a TOFD system, a pair of ultrasonic probes sits on opposite sides of a weld. One of the probes, the transmitter, emits an ultrasonic pulse that is picked up by the probe on the other side, the receiver. In undamaged pipes, the signals picked up by the receiver probe are from two waves: one that travels along the surface and one that reflects off the far wall. When a crack is present, there is a diffraction of the ultrasonic wave from the tip(s) of the crack. Using the measured time of flight of the pulse, the depth of a crack tip can be calculated automatically by simple trigonometry.

Of all the ultrasonic crack sizing methods, TOFD is the most accurate methods. The inspection employs two longitudinal wave (L-wave) angle beam transducers arranged symmetrically opposite facing each other, straddling the weld or base material under test. One probe acts like a transmitter of ultrasonic energy while the other probe receives the ultrasound energy.

While the Time of Flight Diffraction inspection technique is quite simple and straightforward, there are limitations of the technique. Even as the technique detects defects in weld, its surface and near-surface sensitivity is reduced by the width of the lateral wave signal that causes a “dead zone”. The lateral wave signal blanks the near surface defects. The depth of the dead zone can be reduced by using high frequency (10 MHz), smaller diameter, short pulse width probes along with reducing the probe spacing.

WhatsApp us!
Need Help?
Powered by
Hello, How can I help you?
Scroll to top